The upcoming elections, combined with poor market performance of the past five years, have prompted several investors to reconsider their investment portfolio construction and opt for more conservative positions. However, straying from a long-term investment view due to current uncertainty in the market, could potentially be one of the most detrimental actions to take.

“While it is entirely understandable that investors become nervous at this stage, given the state of the stock market and the often unsettling news headlines in the run-up to the South African national elections which are scheduled to take place on 8 May, we do not believe that investors are likely to gain much by changing course in the middle of a poor returns cycle,” says Clive Eggers, Head of Investment Analytics at GTC.

Eggers points out that markets have suffered longer periods of poorer performance at various times, as illustrated by the graph below. 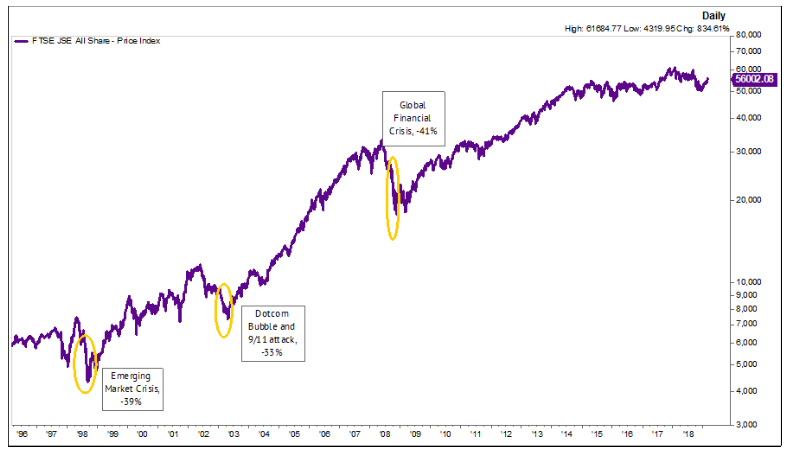 “The reasons for every downturn have been different, but markets have always recovered, and those who have stayed invested for the long term were rewarded by returns well in excess of the consumer price inflation (CPI), and in most instances, ahead of those investors who dis-invested and missed the run when the market turned.”

This time around the reasons for the past five years’ performance are different to previous downturns.

“Globally, the end of quantitative easing has decreased the amount of money available to lend and invest in assets. Subsequently, interest rates in the US were raised, from historically low levels, and have decreased investors’ risk appetite, leading to lower investments in higher-yielding emerging market investments. In more simple terms, there is less money available to investors, who now are more fearful, resulting in lower investments made in higher-yielding emerging market investments – such as those available in South Africa,” he says.

These global events have combined with poor local economic conditions and increased uncertainty. Let’s unpack a few of these factors.

“While we had a political power transition a year ago to a new president, a number of issues have emerged that have caused uncertainty among South Africans, including the debate on land expropriation without compensation, the proposal of prescribed assets, as well as the upcoming local elections and the possible (yet unlikely) resultant policy changes.”

Eggers adds that elections globally – not only in South Africa – are often accompanied by increasingly controversial statements designed to make the headlines.

“This is not unique to South Africa, but it is important to note that this is simply rhetoric that is not likely to end up as official policy. In addition to this noise, there are a number of global events in the near future that are likely to significantly increase uncertainty.”

These events include Brexit as the UK leaves the EU, as well as US trade negotiations, particularly with China. To add to local uncertainty, the country is under review and may receive further ratings agency actions and a possible downgrade to non-investment grade, which may lead to a withdrawal of funds from local bonds.

GTC has no way of predicting what the outcomes of any of these events may be, or when the uncertainty and related market volatility will end, though Eggers reiterates that planning for uncertainty lies at the heart of a resilient investment portfolio.

“While we may not know what the outcome of these events are, we are able to adjust our portfolios to be more defensive when we expect any major uncertain events. These adjustments are in addition to the built-in ‘buffers’ which protect the portfolio against risky events or periods of greater downturn than normal,” he continues.

While investors may be tempted to switch to more conservative investments during periods of market volatility, Eggers reiterates that changing course – especially at a low point in the cycle – can cause great damage to a portfolio.

“It is important to remember that markets do not move in a straight line, so in any given cycle there will be bouts of superb outperformance, and periods of extreme pain on the downside. However, attempting to time the market by trying to judge when the lowest point will be reached, is likely to cause detrimental effects to a long-term portfolio.” 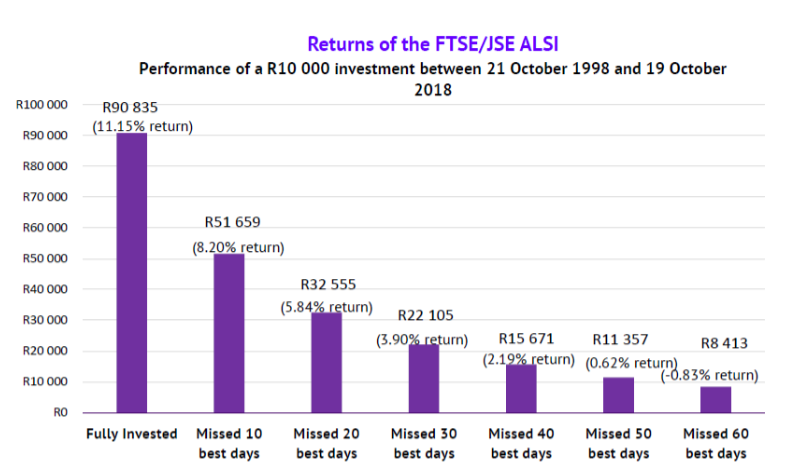 The above chart, based on 20-year returns of the JSE All Share Index, is a powerful illustration of the futility of trying to time the market. If an investor missed just ten of the best trading days over the entire 20 year period, instead of staying fully invested during periods of poor performance, that investor would effectively earn nearly half the return achieved by those who remained fully invested.

“In fact, research by JP Morgan on the US stock market has shown that, on average, six of the best trading days occurred shortly after the ten worst trading days experienced. Therefore, it pays to see the cycle through, as nobody can predict the future.” Underlying this, and in line with every GTC investment mandate, is ensuring that an investment portfolio is constructed according to each investor’s unique goals, timeline and risk appetite.

“While it may be painful, we believe it is best to stay the course – even when the headlines make you nervous. The daily market performance may appear volatile, but when looked at through a 20-year lens, the current downturn might appear to be a mere blip on a long-term radar. Furthermore, if your personal portfolio is adequately diversified, it will likely reflect a far more muted negative return than the outright stock market is experiencing,” Eggers concludes.